I decided to create an installation-type piece, and I thought it would be a really nice idea to make a 'section' of a derelict wall which had been placed in a completely contrasting environment, such as a clean white-walled gallery. I had a play around with brick designs and scale, and came up with the design below. My initial designs had been much larger and probably way too ambitious, but I thought a design such as this could be easily added to at a later date if time permitted. 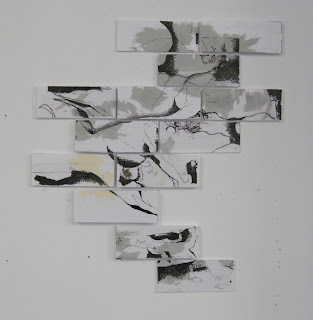 The bricks are all the same size but varying in the amount of layers to them, meaning they would be at different levels from the wall and therefore creating more depth. 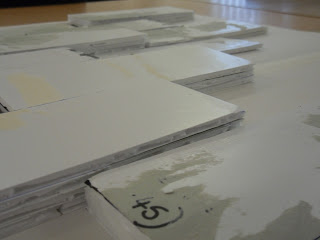 I used the drawings I had done to screen print onto the bricks so that the lines overlapped at certain areas, and I planned to use the different panels at differing levels within the bricks (just to make things a bit more complicated and confusing!). 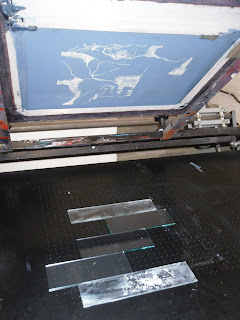 Used a mix of black and silver-stain (turns an amber/brown colour after firing) for screen printing, and was really happy with the results: 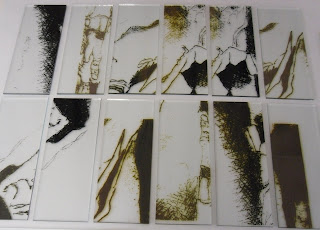 Trying out the layout for the design:

(At this point there was not much overlapping with the lines, but I was getting the basic layout organised so then the other layers could fill in the gaps with the lines). 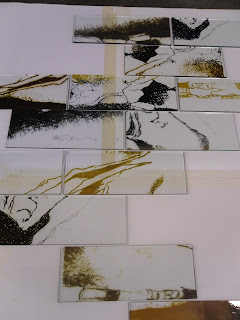 Details of some of the individual bricks:

Some of these are singular layers at this stage, and some of them have a smashed glass layer added to them. These are all yet to be sandblasted at this point too!

I had a play around with having 2 or more bricks where the smashed pattern actually continued over all of them, as I thought this would be much more effective and make the piece seem more like a whole rather than individual pieces put together. Really liking the effects these were having: 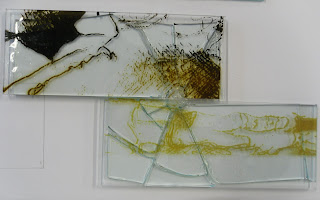 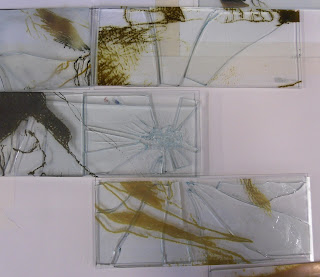 After sandblasting (the best bit!):

Because I had UV-bonded the layers together (basically glue for glass which is cured under UV light), some of the sand from the sandblaster had actually become embedded into the inside of the piece, which in theory would be an awful and disastrous thing to happen, but actually I really loved it! I thought it added another textural quality to the bricks and really added to the decaying theme, so I was definitely not bothered by this at all!